In the past ten years I have witnessed tremendous progress in both the acceptance of the the mental game, or inner game of tennis, and the number of conversations about it. You will be hard pressed to go 15 minutes without a commentator at any Grand Slam event not expounding on the relevance of “mental toughness.”

While the amount of dialogue about the mental game may appear to have reached an all-time high, the concepts, the devout followers, the relevance of the inner game, are far from new.

And, I think it is fair to say that in 1972 the Inner Game of Tennis, authored by Tim Gallwey, was the first widely received book, not just relevant for the game of tennis, but for all sports–and eventually business, too.

Why? Was it timing that made the Inner Game of Tennis so successful? Perhaps it helped to be one of the first on the scene. It was cutting-edge.

But, I don’t believe that was the primary reason for its great success. Rather, I believe, it was the premise behind Gallwey’s work that struck a cord and humanized the inner conflict we all face when attempting to perform, particularly something new. 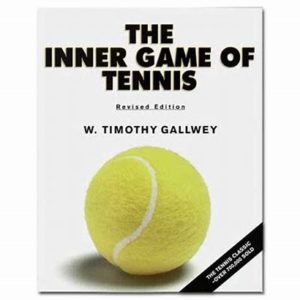 The Inner Game of Tennis

As a sport psychology consultant and psychotherapist for the past two decades working directly with athletes on their mental game, I can confidently claim that Tim Gallwey’s understanding of the mind/body dichotomy (self 1 and self 2) was ahead of its time.

The Inner Game of Tennis made difficult concepts (ego/Id/superego) become more accessible for all athletes as they now had way to conceptualize the experience of trying to perform without interruption from the brain’s natural cognitive process. With a new instruction manual for the mind (quieting self 1, the brain, so self-2, the body, could perform naturally) athletes could now play without the same level of interference. “Bounce, hit” became the mantra for players along with the idea of trusting the body and the principle of “less is more” when it comes to thinking and where you place your attention on the tennis court.

For me, this process became a personal quest over the past two decades to help other people truly become a witness of their thoughts–not victimized by them–refocus on the moment at hand and committing to their intention, win or lose.

Easier said than done, of course. But isn’t that what makes this game so damn frustrating and compelling? Clearly, a worthy pursuit!

Personally, I am extremely grateful for the Inner Game of Tennis. It has helped shape my career and approach to sports psychology. I’m humbled by the fact that some have compared my book, programs, and online courses, to Tim’s incredible work.

A big thanks to Tim Gallwey for diving deeply into the habits of the mind over 4 decades ago. He blazed a trail that has served as a foundation for people wanting to master their craft in a variety of sports and in many walks of life.