Many veteran players who still coach and compete simply believe they have better feel for the ball. Mark Farren, Director of Sleepy Hollow Tennis Club in Orinda and former world-ranked player, described it to me this way:

“Now, I know what I do well. I know what I’m trying to do with the ball. For example, if I hit a good forehand deep and take away my opponent’s position, I know what the reply is going to be. This allows me to close out points easier and do more with my game. My technique is also better because I know why I hit the ball well. I understand the angles of the court better so I can capitalize on my game more now. I use information to my advantage. The difference is night and day.”

This is very different than many junior players, for example, who are still in the “wait and see mode.” They don’t yet fully understand how their shots will affect their opponents and tend to hesitate before they attack the net or hedge over to a certain part of the court because of their awareness of certain patterns of play. Anticipation is a crucial element in tennis and becoming aware of how your strengths can generate specific replies from your opponents will give you a tremendous advantage in the rally. 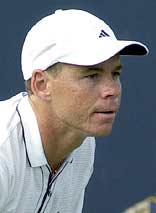 Getting more feel for the ball is helpful. It leads to confidence. You can repeat the good shots more frequently because there is more muscle memory developed out of repetition. Also, understanding how your shots will impact your opponent’s positioning is key.

Many junior and recreational players could benefit from a deeper understanding of how their shots affect certain opponents. For example, when I hit a deep, inside out forehand to my opponent, what tends to come back? For me, it is often a weak reply that will either give me another forehand put-away or an opportunity to attack the net. Players need to know right away when they hit the ball what this shot will mean in terms of positioning for the next shot. This built in awareness is an important key to better tennis.

So there I am. Warming up in the first round of this ATP event, 10 years after having left the Tour, against Draper. There are nine ball boys, 9 referees (one for every corner of the court it seems), including the chair umpire. National coaches, college coaches, peers and Tour players are on the sidelines. There is even the Mercedes logo in the net that we all see on TV. For all intensive purposes, this is the “show.”

My test in using perspective, relaxed muscles, and a re-focusing on process came last week at the Sybase Qualifying. Having played a week-long pre-qualifying tournament, which consisted of 5 matches, I worked my way into the qualifying tournament that would give me the possibility of playing against the “big guys”—Agassi, Phillipousis, Rusedski. In the first round I drew #230 in the world (former top 50), Scott Draper.

Am I nervous? You bet. Am I thinking about the result? Yeah, it’s there too. But what do I do with all of this nervous energy and extraneous thought? I channel it into the ball. I commit to playing loose and going for my shots no matter what. I smile. I remind myself that this is fun—this is why I play the game.

This is my opportunity and I blend that in with a dose of perspective. If I lose it isn’t the end of the world. I know that now. I am just lucky to be right where I am. I absorb it all and cherish the feeling. I keep my body loose and this becomes my focus. I breathe constantly between points. I don’t think I’ve ever used deep breathing as much as I do here. And it helps big time.

So guess what? I surprise Draper with some big forehands and have him running and fighting to stay in the point. I win the first set 6-4. He plays a bit more aggressively in the second set, I am a bit winded and he wins the second set 6-3.

In the third set, I am feeling tired because we’ve been on the court for over an hour and a half playing some tough tennis but this is soon forgotten as my competitive instinct takes over. He breaks me in the first game but I break him back at 3-2. I break again at 4-3 and go up 5-3 serving to close out the match! The nerves are a bit more pronounced now, but I shake it off with a quick image of the beach to remind me there is more to life than this match. It helps.

But Draper does what all top players do when it’s crunch time. They step up and play MORE aggressively. They don’t protect. They don’t back off. They go for it. Draper does just that. He starts attacking me and coming to the net constantly. At 5-3 30-40 he hits a shoestring volley for a winner ala Pete Sampras. To make a long story short, his aggressive play coupled with my fatigue and loss of momentum, allows Draper to prevail 7-5 in the third.

I didn’t hang my head after the match because Draper took the match from me. I didn’t protect at 5-3; he simply outplayed me. After the match I asked Draper “So what were you thinking when I was serving at 5-3 in the third set? He looked at me, smiled and said, “Honestly, I was thinking, Scott you either “knuckle up” here (he’s Australian) or get on a plane and go home. Which do you want?” Then he added, “If I lose, it’s not the end of the world. It’s just a tennis match.”