When it comes to athletic competition, everyone talks about momentum — psychological momentum, when everything is moving in the right direction for one competitor or another. As I write this, Pete Sampras has won 24 consecutive matches and is moving toward his 13th Grand Slam, the most in tennis history. Pete’s recent performance defines the word “momentum.” 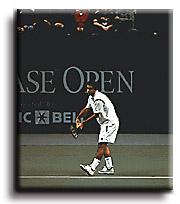 Psychological Momentum refers to the perception that a player is moving toward his objective, thereby resulting in greater levels of energy, perception of control, enthusiasm, and motivation (Journal of Sport & Exercise Psychology). Another model within the sports psychology literature defines psychological momentum as a “positive or negative change in cognition, affect, physiology, and behavior caused by an event or series of events that will result in a shift in performance outcome.”

Most of us have experienced it in one match or another, that intangible feeling that makes us seem unstoppable in the moment; as if fate was on our side. In this highly aroused state we feel an almost supreme confidence in our ability to perform. The nerves are gone and so is that constant internal dialogue. We are ready to roll. During this psychological shift we feel in total control and enjoy every second of it. But how to obtain momentum and take advantage of its awesome power,… that is what defines champions.

Since momentum is a shift in our perception of a given match situation, it follows that we do have some control over the experience. Though it is true this shift occurs in response to a particular event (i.e. a successful let cord volley on a key point), we can improve our ability to generate momentum on our own. For example, at 4-4, deuce in the third set, your opponent misses an easy overhead giving you break point. You want to capitalize on your opponent’s missed opportunity and literally tell yourself you are in charge now. Invariably, your opponent may also experience a sudden shift in confidence and become more nervous. As your opponent begins to second-guess, you immediately perceive you are in the “driver’s seat”, a momentum shift has occurred. So don’t miss out on this opportunity to harness momentum when it presents itself. 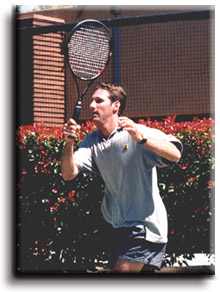 The reason momentum is so powerful is because of the heightened sense of confidence it gives us — the most important aspect of peak performance. There is a term in sport psychology known as self-efficacy, which is simply a player’s belief in his/her ability to perform a specific task or shot. Typically, a player’s success depends on this efficacy. During a momentum shift, self-efficacy is very high and players have immediate proof their ability matches the challenge. As stated earlier, they then experience subsequent increases in energy and motivation, and gain a feeling of control. In addition, during a positive momentum shift, a player’s self-image also changes. He/she feels invincible and this takes the “performer self” to a higher level.

It is important to know, however, that a psychological momentum shift does not happen when a player is feeling anxious. If your mind is racing or you feel a pit in the stomach, most likely you will not be able to capitalize on the momentum opportunity. Under these circumstances, confidence will not be enhanced. Therefore, it is critical to remain loose and relaxed physically, which is accomplished through consistent deep breathing and positive self-talk before and during matches.

Next time you are watching a tournament, observe the shifts in momentum. Often, they are quite obvious. Players experiencing negative shifts in momentum will typically hang their heads or curse the Gods on big points. At the same time, you may notice their opponents moving just a bit more confidently, with shoulders and head more upright, a seemingly greater intensity, and a spring in their walk between points. 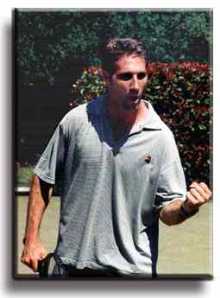 Specific physiological changes in a player’s body language often accompany momentum shifts. What is exciting is that we can learn to create our own internal momentum at key times in matches, with the right mind set and on-court behavior. When playing a match, try and carry yourself upright between points and increase your intensity after a well-played point. Do this on a consistent basis and I guarantee that you will create a more positive experience that you can feel inside.

There is, however, a loophole in psychological momentum. It also happens that when a player experiences a negative shift in momentum, he/she can actually begin performing better under certain circumstances. That is, when a player senses momentum slipping away, he/she may begin raising intensity to counteract the possibility of a momentum shift. The edge often goes to the player who perceives the shift first and can capitalize on it best.

What makes Sampras so great is his uncanny ability to capitalize on the momentum and close out matches. Once he gets ahead, his serves become harder, his volleys crisper, and passing shots seem to drop in with ungodly accuracy. Sampras was quoted recently in the San Francisco Chronicle:” I just hope I can ride this wave out.” Well,… if he believes he can, I think he will.