A few days ago my son, Will, asked me to jump with him on the trampoline. He particularly likes it when I bounce him really high, which I do by using the well-known technique where I jump right next to him just before he lands sending him twice as far into the air as he would go on his own.

When he’s in the air, I notice a branch of a tree hanging over the trampoline that is well beyond his reach. Pointing to the branch, I say, “Hey buddy, you see that? Let’s see if you can touch it.”

He’s immediately excited. “Ok,” he says very enthusiastically. To be perfectly honest, my son will take a shot of dopamine anytime it’s legal or ethical.

Over the next ten minutes we jump. With his right arm extended as high as it can go, he is still at least a foot away. We begin to talk about how high some of the greats could go, including Kevin Durant, Lebron James and the great, late Kobe. 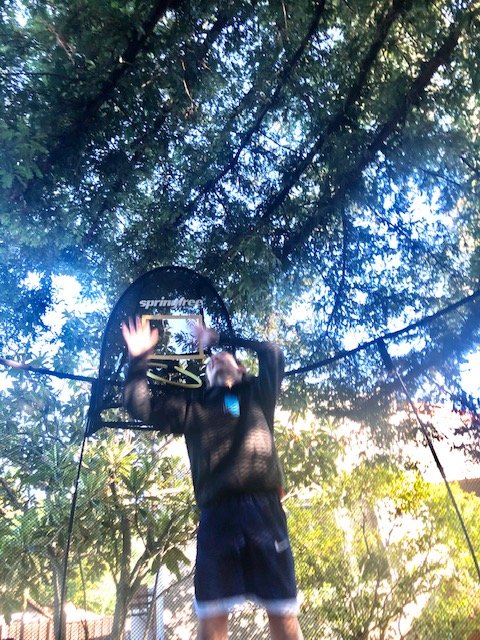 By the time we’re done we are about a foot away from touching the branch.

I tell him, “Will, I bet you can touch that branch by October.” Incredulously, he asks, really by October?

The next day he runs into my office and pleads with me, “Dad, let’s go. Jump with me.”

We’re both fully dialed in. I bounce him as high as I can. He goes higher. He reaches as high as he can. He’s maybe eight inches away. Progress.

I, too, am surprised by how much he narrowed the gap overnight. I haven’t seen Will this engaged in an everyday activity, maybe ever.

I recalculate my prediction and tell him, “Gosh. Maybe you’ll get it by the end of the summer.” He liked this idea, a lot. But, it just didn’t seem possible to be 12 inches away on day one and think that this could happen any sooner.

Day three. “Dad, trampoline. Let’s go.” How can a father turn a kid down when he’s this excited about a goal? You can’t.

We are all in just like the two prior days. We have to time our jumps just right. The rhythm has to be perfect if we have any chance of getting any higher. We do make progress.

Amazingly, we are now 2-4 inches away. Neither of us can believe it. Will is beaming.

I can’t remember being this captivated by a goal in quite some time myself. It seemed like a life moment that was just enveloping both of us.

It was all happening in slow motion–my son and I jointly engaged in a goal, defying the odds given the sheer distance of the branch above us.

There is very little quite as captivating as a young child fully engaged in a task, self-driven and excited at the same time

Day 4. I’m in my pajamas. I’m getting ready to shut it down. There’s barely any light left in the day. “Dad, trampoline. Let’s go.”

We jump. By some miracle it seems, we are now an inch away. We are both ecstatic and in disbelief to be honest. We see that it is possible. Really possible. Not in October. Today.

We are literally a quarter of an inch away. We are giving it everything we have. Both of us. I’m launching him as high as I can. He’s reaching as high as his arm will go. I’m partly worried it’s going to come out of his shoulder socket.

With my calves burning, you could see the determination on his face. “We got this,” I say.

And, would you believe, on day four around 8:45pm at night, the kid touches the branch and we fall to the ground yelling and hugging in ecstacy. I’m sure the entire block heard us screaming.

But we didn’t just stop after he touched the branch once. He wanted to try to get it again!

So, after our loud celebration we jumped again with all of our energy and a newfound level of BELIEF.

And here’s the kicker. What happened next truly blew my mind.

We leave the trampoline in shock and extremely gratified. As strange as this may sound, it is one of my very best moments as a parent, probably of my entire life. And I had to share it with you, particularly if it brightens your mood in the midst of such a trying time for all of us….

It also made me wonder. Is there anything valuable here for all of us as we navigate our lives going forward in our new world and on the court?

I think this experience is loaded with life lessons. But, for now I just want to focus on one.

Is there a “stretch” goal–something you have thought about doing, perhaps even started but then stopped, because you either underestimate that you can reach it or over calculate how long it might take as I did with Will on day one on the trampoline?

A few months ago, when I teamed up with the world expert on strategy, Craig O’Shannessy, to create the first-ever online course that incorporates strategy with the emotional and mental aspects of the game, it was because I felt there was something missing in my game and many players I worked with. How to achieve both your optimal mental state and execute the right tactical options in matches–to bring it all together. Personally, I believe I am 75% there. SNEAK PEEK 5: 75% OF POTENTIAL.

I have witnessed hundreds of extraordinary transformation for over two decades.

One of my favorite clients of all time, a tennis player who played Billy Jean King when she was 11 years old, continues to learn and build her game, winning her first gold ball not long ago.

I think of my young client, a teenage boy with a vision of living in a small room and going on to become a black belt in Karate and an employee for the FBI and working with NASA.

I think of a professional tennis player told by her parents that she wouldn’t amount to anything and then climbing into the top 40 in the world, losing in the round of 16 at the French Open and making a living on the pro tour.

Or, the race car driver writing to tell me that my audio program, Fearless Tennis, helped him make the decision to become sober.

Whatever your age, whatever your situation, I promise you there is a branch right in front of you worth touching. And it may be more fun and less difficult than you might imagine.

Whatever your endeavor, there is no doubt you can be better if you choose to reach for the next highest “branch.” What is that for you?

I would love to hear if this story inspires you to pursue something important to you, including a revamp of your game, perhaps, to finally reach the potential you know you are capable of.

If you’d like to learn more about the online course I created with Craig O’Shannessy, the world’s leading strategy analyst, Click here and watch this 3 minute video: Watch the Video for Getting Tight.

← Finding the Music Inside of YouThe Link Between Persistence and Contentment →